HomeNews Syria – The war has destroyed hearts, but among the young people there is an unshakable faith

Syria – The war has destroyed hearts, but among the young people there is an unshakable faith 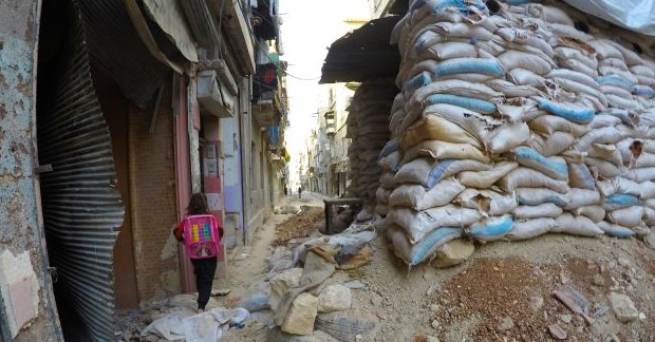 (ANS – Aleppo) – The headlines of many newspapers around the world report the plight of the Syrian people. “No one cries for Syria”, “The world does not react to a human disaster greater than that of Rwanda”. “Nobody cares what happens to us Syrians, even when bombs devastate our homes and our children are dying. No one does anything to prevent the massacres or to help those who have lost everything.” This was the despairing comment of an old woman as she reached Turkey. The war in Syria has seen a resurgence in the past few months, so much so that the Salesians now speak of “very high levels of inhumanity”.

Over half a million have died, there are more than 1.6 million injured and more than 11 million displaced persons. In this context, the Salesians continue to serve the population in the most normal way possible, in a setting surrounded by violence, where there is no water, no light and a shortage of food.

The violence in Syria began in March 2011. Fr Alejandro León, Salesian missionary in Syria, says: “It is not a civil war. It is a war between two armies, one Syrian and one made up of many nationalities, more than 80 of them, with many forces and with many interests.”

The Salesians in their three houses in Syria (Aleppo, Damascus and Kafroun) have had to live in difficult situations. “For example, a child waiting for a bus to come to our house was killed when a missile exploded. Two of our youth leaders died in their home with their mother during a bombing,” says Fr Leon.

In Syria, he says, “every single person has a few dead people to mourn, and the problem is the pain which can lead to revenge.”

Yet, he continues, “we have seen many blessings and many miracles: the war has brought about what the missionaries were unable to achieve previously – an unshakable faith among the young. The war has destroyed the heart and humanity of many, but many others have found a true faith, before which we can only bow down.”

Is there anyone who really cares about the statistics? “There are more than two million refugees who do not receive humanitarian aid. There are four and a half million displaced persons and four million children are in grave danger.”