HomeNews “DON BOSCO IS MORE ALIVE THAN EVER!” – Rector Major message about Aleppo

“DON BOSCO IS MORE ALIVE THAN EVER!” – Rector Major message about Aleppo 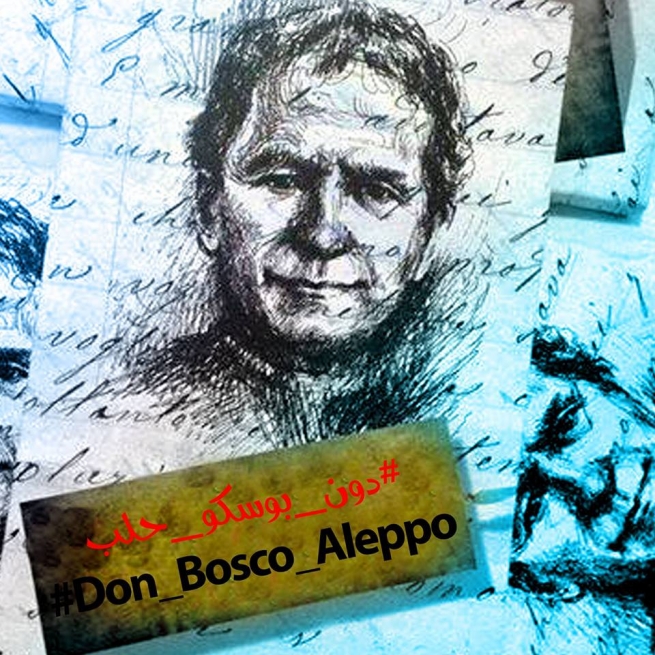 THEY TELL ME THAT IN ALEPPO DON BOSCO IS MORE ALIVE THAN EVER! ALL THE SALESIANS HAVE REMAINED THERE, AND THEY BEAR THE REFLECTION OF THE FATHER WHOM WE LOVE

Dear Friends, readers and my dear Salesian Family, I write this first greeting of the New Year to you with Don Bosco in mind, given his feast day is in January, and after having met with the Salesian Provincial of the Middle East.  He, Fr. Munir El Raì, a Syrian born in Aleppo, spoke with me with tears in his eyes – not only for the sufferings of his home city and his people but also for the incredibly precious moments he is living in the midst of the bullets, bombs, and destruction.

He said to me: “Don Bosco is more alive than ever in Syria, in Aleppo.  In the midst of the wreckage and debris, the Salesian house keeps its doors open every day to welcome hundreds of boys, girls, teens, and young adults because we want life to continue though surrounded by so much death.  And I can tell you that it is incredible how instead of diminishing, the number of young people coming grows and continues to increase.  It moves me to see more than 1,500 boys, girls, and youths – double the number of former times – who want to come to Don Bosco’s house to meet with the others, to live, to pray, and to play.”

He added: “I must tell you that it also moves me that my brother Salesians wish to remain among our people.  They are able to leave if they want, because they can, but not one wishes to go, risking the same fate as our people’s.”

I listened to him, unable to speak a word, myself deeply moved.  Certainly Don Bosco is more alive than ever.  Indubitably, he is so in Paradise, in that Other Life that is life in God, but also here, among us because there are hundreds and hundreds of Salesian Priests, Brothers, Sisters, laity, and youths who continue to live his dream and his educative and evangelizing mission, and his one-on-one encounter with each child and each youth.

In the many “Valdoccos” of the world

What is said of Aleppo can be said of many other places.

One of the things which Don Bosco used to remind his Salesians with great insistence – and, most especially, the missionaries who went to America – was this: “Care especially for the sick, the children, the elderly, and the poor.”  This explains the little “Salesian Miracle” in Aleppo – that a house exists where everyone and each one can find a home.  They won’t find much to eat because there’s a scarcity everywhere, but they continue singing to life and betting strongly on life in a situation of death.

This reality fills me with joy and, from this day forward, my lips will profess their homage and thanksgiving to Don Bosco who without any pretensions was great because he was able to reach to the depths of a person’s heart with just a look, a glance, a silence, or a word.  And this is what continues to happen today in the many “Valdoccos” of the world.  Thus I cannot resist sharing with you a very simple incident that speaks of the good sentiments and greatness of Don Bosco’s heart.  It is only a little anecdote, but it says it all.  Many years after Don Bosco’s death, a Salesian, Don Alessandro Luchelli, who had lived at the Oratory in Valdocco (Turin) for a number of years with Don Bosco, recounted the story that in 1884 discipline at Valdocco had become very strict, contrary to Salesian tradition – so much so that Don Bosco himself was pained to see certain things happening.  He expressed his concerns in our well-known “Letter of 1884 from Rome.”  Alessandro continues: “One day, Don Bosco encountered me as I was standing beside a line of boys under my care while they were waiting for their turn to go to the study hall.  I kept strict discipline with a stern expression on my face, demanding that they maintain a perfect, single-file line.  At that moment, Don Bosco passed by, placed his hand on my shoulder, and said to me: “But leave them be.”  Don Bosco didn’t like lines.  He tolerated them only when the number of boys had increased greatly and it seemed to be necessary.”

Now I share with you this other testimony which speaks of this heart of a father who safeguards the simplest things of the home, the family, and the young people of a Salesian house.  Just as in Aleppo, so it is in Sierra Leone, in Ghana, in “Don Bosco City” in Colombia, in Ethiopia, and among the refugee children sheltered in the Salesian houses in Germany – as it is in hundreds and hundreds of others which could be named.

This is what needs to be said to us also today, together with Fr. Munir of Aleppo, that Don Bosco is alive – very alive in those Salesian houses around the world where the Salesian spirit thrives and, also, in how much life his sons and daughters – Religious and laity – give everywhere, trying in the simplicity of their lives “to be Don Bosco today”!