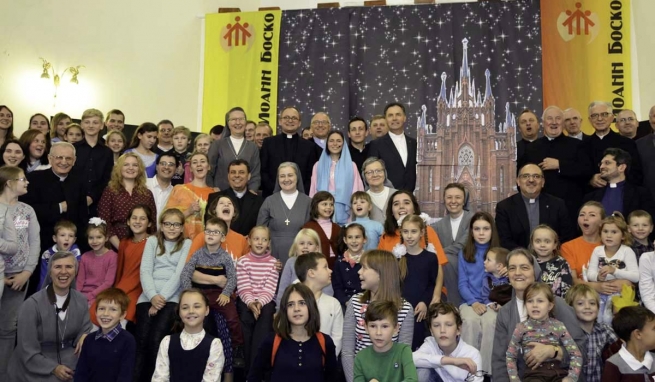 12 October 2016 By Renato No comments yet anniversary, Moscow, Rector Major

(ANS – Moscow) – On the weekend just ended, 7 to 9 October, the Salesian community in Moscow celebrated the 25th anniversary of their presence and service to young people. The Rector Major of the Salesians, Fr Ángel Fernández Artime, visited the Russian capital to join in the celebrations.

Taking part with him in the various events were Archbishop Paolo Pezzi of Moscow; Fr Tadeusz Rozmus, Councillor for the Central and Northern European Region; and Fr Romano Jachimowicz, the Superior, and the  members of the Provincial Council of the Province of Northern Poland (PLN) to which the Salesian community in Moscow belongs.

These were three grace-filled days of reflection on the presence and prospects of the Salesians and the Salesian Family in Russia.

The Rector Major was welcomed at the airport on the Friday evening by several members of the Salesian Family. His official activities began on Saturday morning when he met with the Salesians at the nearby work of Oktiabrskij. The Rector Major and his secretary, Fr Horacio López, spent the entire day with the confreres. Later he greeted the young people being cared for by the Daughters of Mary Help of Christians (FMA) at their facilities, and he offered them some words of confidence and encouragement.

On Sunday the entire local Catholic community gathered in the morning at the Cathedral, which is in the pastoral care of the Salesians, to celebrate the Eucharist together. This was also the occasion for a public recognition of Fr Iozif Zaniewski, who has been present and active in the Salesian work of Moscow since its inception.

The afternoon was marked by the usual climate of Salesian joy, a festive meeting of the Rector Major with the young people, the Salesian Cooperators, the FMA and those who share the educational work and pastoral work of the Salesians. There were some short artistic performances by the young people, tributes were paid and there were some informal moments, during which he gave thanks to God for the twenty-five years of Salesian presence in Moscow.

Numerous photos of the visit of the Rector Major are available on ANSFlickr.