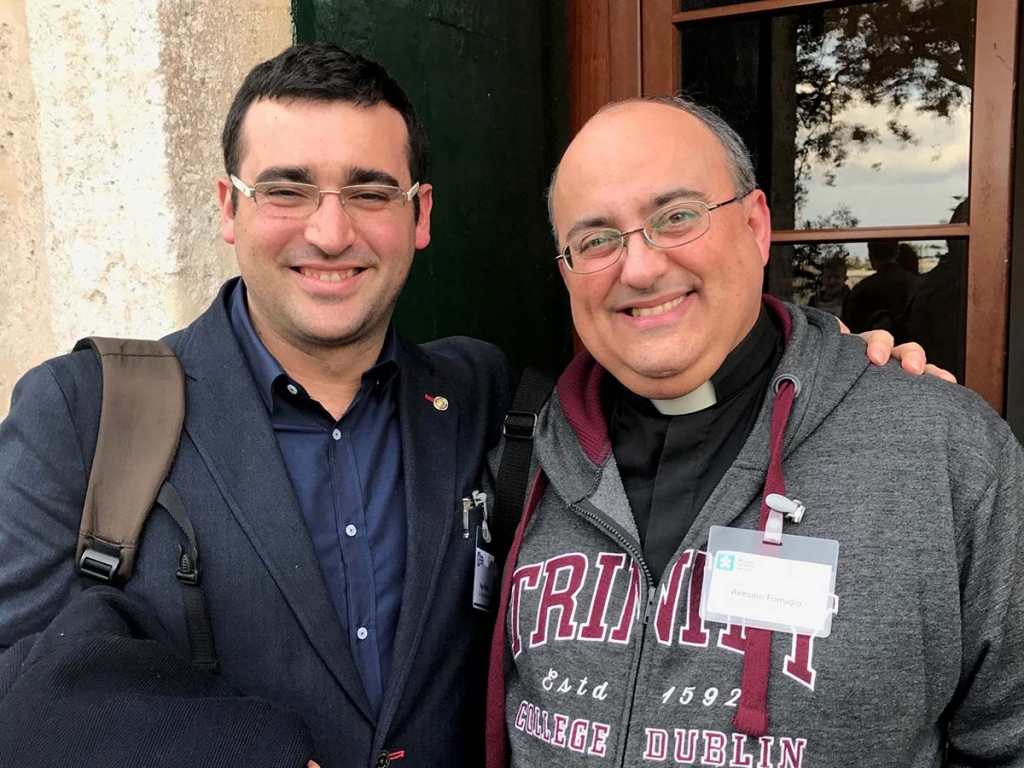 5 February 2017 By Renato No comments yet Malta, Migration, Unaccompanied Minors

(ANS – Malta) – On 26th and 27th January, Fr. Antoine Farrugia and Ángel Gudiña have taken part in the Conference “Lost in Migration”, organized by the Maltese President’s Foundation for the Well-being of Society together with Missing Children Europe. The Conference was focused on the terrifying phenomenon of the 10,000 minors being unaccounted for in Europe last year, as Director of Europol, Mr. Rob Wainwright reported upon.

This is taking place simultaneously with the EU Council Meeting on Migration attended by Justice and Home Affairs ministers in Malta. The objective is for civil society to influence the decision-makers.

Mrs. Marie Louise Coleiro Preca, President of the Republic of Malta, and main supporter of the initiative, shared a nice moment with DBI representatives, thanking the work Salesians do in Malta but also in other countries for the education and adequate attention of migrants. An example of this, was the projection of a documentary, “Kakuma, the invisible city”, a huge refugee camp where Salesians do an excellent job with refugees on providing quality training for thousands of children and young people.

Friday 27th saw Commissioner on Migration Dimitris Avramopoulos and EASO director José Carreira joining the Conference to answer questions from the audience on what is failing in the system. Commissioner Avramopoulos committed himself to bring all the messages to the Council and thanked the organisers for the opportunity of meeting such an “expert audience” underlining that it was the first time he was invited to such a big gathering of Civil Society, and he appreciated this opportunity.

Panel discussions included quite significant contributions such as from Ambassador Laura Thompson, Deputy Director General of IOM who stated: “We have many of these children… of 25,000 children that arrived in Italy last year, only 3800 are eligible for relocation. What do we do with the rest? The children have lost trust in the system. We have to find solutions to give them pathways to reunite with their families. A harmonized system is highly important”. Vincent Cochetel, Director of the Bureau for Europe, UNHCR was adamant that “a non-individualized approach to these children is in direct contradiction of the principle of Best Interests of the Child. The EASO guidelines are not being implemented. A Guardian is given 80 children… they cannot even know where they all are, let alone build a relationship and get to know them. Why? We are not even trying to get in touch with their family.”

The Conference also included Living Libraries, personal stories from both practitioners and minor migrants sharing some of the reception conditions and integration procedures. In the last part of the Conference, several workshops were organized by different Civil Society organizations to provide concrete conclusions. Apart from a meaningful experience, the participation of DBI has opened many possibilities of cooperation for our Salesian realities working with Migrants.