Italy – Solidarity and support for the people affected by the earthquake 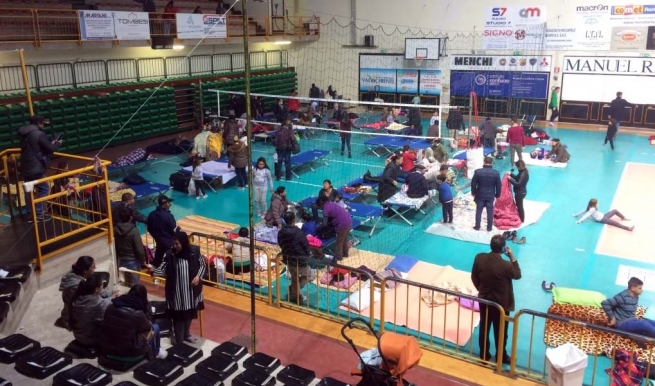 2 November 2016 By Angel No comments yet earthquake, help, Italy, solidarity

(ANS – Rome) – The Salesians of the Special Circumscription of Central Italy have taken action in several ways to help the tens of thousands of people affected by the earthquakes that are shaking the central regions of the country. They have offered accommodation in their houses and are collaborating with centres for displaced persons. They have also organized additional oratory activities. The Salesians and lay collaborators in the mission, including many young people, are offering psychological, human and spiritual support.

The centre of Colorito di Ussita which is often used by the Salesians for youth activities is located in one of the most affected areas and suffered some damage as a result of the earthquakes of 26 and 30 October. However, it is hosting many people from Ussita who were already homeless following the earthquake of 24 August.

“Colorito was started precisely to welcome people and offer accommodation. We welcome everyone, including families with dogs, despite what has been said on SkyTG24 and RaiNews24. We are sorry for all those who have not been able to find a place with us for reasons of capacity,” the Salesians have stated.

Since September the Salesians in Macerata have been accommodating in their school buildings the 300 pupils of the “E. Mestica” Comprehensive School in the city. They had to be transferred as a result of the earthquake of August 24. The Salesian school was closed in 2014.

The Rector, Fr Flaviano d’Ercoli, together with Fr Salvatore Policino and Fr Roberto Cornacchia, are giving human and spiritual assistance to young people and families who are suffering psychologically.

Meanwhile, the Superior of the Circumscription, Fr Leonardo Mancini, has agreed certain forms of collaboration of the Salesians with the Diocese of Rieti which was strongly affected by the earthquake in August. These include:

• Pastoral ministry by one or two priests each weekend from mid-November until the summer of 2017;

• Organizing a summer camp, from mid-June to mid-August 2017, in the village of Amatrice;

• Collaboration in the construction of a closed covered structure for social activities, to be completed in a short time.