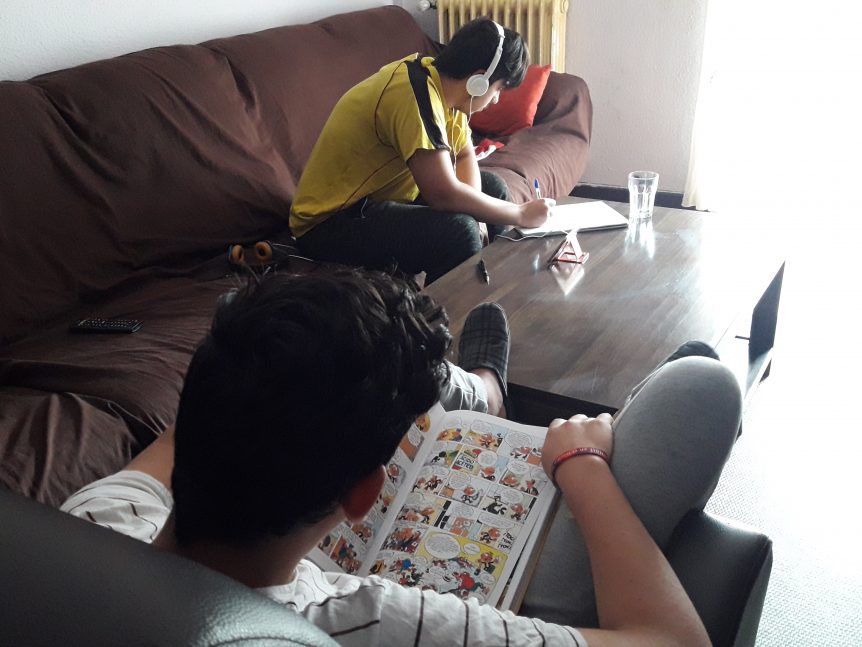 All the families had to adapt and learn to live together in confinement, at home, without being able to go out. But what about the children’s and young people’s shelters? How are they experiencing this special circumstance? We collected encouraging information from two partners of Don Bosco International, “Salesiani per il Sociale” and “Plataformas Sociales Salesianas, respectively the national networks/federations for social works of the Salesians of Don Bosco in Italy and Spain.

The Salesian Social Platforms in Spain have 83 residential resources. Among them, there are emancipation centres, centres for migrants, centres for transition to adult life, centres for people seeking international protection or refugees in vulnerable situations. About 700 people live in these centres. In the time of confinement, the life of these young people, as well as the activity of the youth workers, has changed considerably and the educational teams have had to deal with an unforeseen and unknown situation.

Something common that educators highlight is the surprise, for good, of the reaction of most of the young people who live in these centers and flats. “After the first week of awareness they have understood the need to stay at home. They have never spent so many hours at home nor have they spent so much time in ‘family’, they are doing very well, with great commitment”, they recognize us from the Pinardi Federation, a member of Salesian Social Platform based in the region of Madrid.

When it comes to adapting to the new situation, youth workers and educators highlight two common strategies. On the one hand, the educational teams that live with the young people explain that they changed the work shifts. “We are on 12 hour shifts, 3 days a week and the rest of the days we rest”, specify the educators of the centres of Torrent and Valencia of the María Auxiliadora Foundation. On the other hand, there were those who carried out their intervention virtually, going to the home if there was an emergency or if the recipients needed medical material. This second strategy was often adopted in emancipation projects or for migrants who request international protection.

In the flats and centres where the educators live with the young people, very marked timetables have been established: “we have delayed the time for getting up, but then there are agreed timetables and schedules for meals, work and study times, leisure and rest times”, state the educators of the Main Foundation in the Canary Islands.

“The extension of intervention hours has brought more time to take care of conversations, to be together. We have seen how some get the best of themselves and we have been forced to leave our comfort zones, to look for new resources, they have made us change”, reflects José Carlos Rodríguez, coordinator of the Residential Project “Casa Garelli Protección” of the Pinardi Federation (Madrid), something that is shared by the educators of Casa Don Bosco in Villamuriel del Cerrato and the “Tragaluz” home in León of the Juan Soñador Foundation.

“It has been a very interesting educational experience. As young people spend so much more time together they value coexistence more and work more on tolerance and frustration. Before, at any emerging problem, the majority of them used to seek refuge in the streets. Now they have to face it and try to solve it”, state the educators of the centres of the Fundación Canaria Maín (Canary Islands).

“The commitment and the creativity of the educational teams have been fundamental. More than ever ‘Don Bosco’ is the home of boys and girls who have no other home, and our colleagues are those open arms of Don Bosco for them. The commitment of educators from other socio-educational programmes in the design of new recreational or educational activities, to make home confinement lighter, also stands out”, explains Ignacio Vázquez, the general director of the Don Bosco Foundation (Andalusia, Extremadura and the Canary Islands).

“We Salesians trust the young people, and every day they give us lessons in their capacity for adaptation and resilience. Young people continue to be an opportunity for learning and deepening our vocation as educators”, they say from the teaching team of El Desván of the Juan Soñador Foundation in Valladolid.

What comes next? Of course, challenges did not fade away. “This situation of standstill is going to affect a lot the rhythm for the emancipation of some recipients since finding a job will be much more difficult and also for those who are pending resolution of documentation because everything has been delayed”, say the educators of the Fundación Canaria Maín (Canary Islands).

“Most of the young people are worried about their administrative situation, the delays in their files, the loss of job opportunities. Many young people saw the summer as a time of opportunities that has collapsed”, says Noelia Hidalgo, coordinator of the “Pinardi Nicoli” residential project in Madrid.

Rosana Palomares, coordinator of the emancipation flats of the Ángel Tomás Foundation, underlines that a commitment is required in which there is no lack of resources to attend to the most vulnerable groups, a commitment to work for social inclusion and cohesion in a solid and effective way. As Ignacio Vázquez points out: “We have learned that nobody is ‘saved alone’ and that cooperation between the public and the private sectors, and between social entities, is absolutely essential. We sincerely believe that we will not return to the previous normality, but we will certainly return to a ‘new normality’ where we can continue to develop our mission of providing opportunities to the most vulnerable young people”.

Click here if you want to read the full article in Spanish.

“We’re here!” was the title of the campaign launched by the national federation of social works of the Salesians of Don Bosco in Italy. This sentence was repeated several times in the social media over the last few months. As soon as the emergency began, the educators and youth workers of “Salesiani per il Sociale” immediately made themselves available to the many children and young people welcomed in the communities and centers scattered throughout Italy, ensuring proximity and concrete support to face this difficult pandemic.

Many of the children hosted in the residential care services (“Casa Famiglia” – “Family Home”) didn’t have a home to go to while others risked returning to a family that wouldn’t guarantee them support. The managers, educators and youth workers of “Salesiani per il Sociale” kept these residential services open for these children and took all the precautions to avoid contagions.

Fr Antonio Carbone SDB, coordinating two communities for minors in Torre Annunziata (Naples), was among the first ones to ask the national federation “Salesiani per il Sociale” for help: “We urgently need three sewing machines! Modu, one of our boys, used to be a tailor and now he is willing to sew 300 masks a day to be distributed free to the poor of the city”. In a few weeks the national federation delivered three new professional machines to the community in Torre Annunziata, allowing Modu and his companions to start production. In the complete lack of masks, the contribution of Modu and his friends was essential: “I am putting my skills at the service of Fr Antonio, the “Torresi” (local people of Torre Annunziata), the Italians” –  this is what Modu wrote to the national federation – “Don’t worry Italy, everything will be fine!”

Eleonora Brandi, who is responsible for the “Stella del Cammino” residential service in Santa Severa (Puglia), asked the national federation for support for basic necessities and help in paying for the house’s utilities. Thanks to the timely contribution sent by “Salesiani per il Sociale”, Eleonora was able to buy sanitizers, masks and gloves to make the rooms in the house safe for the ten children who were received.

Distance learning was adopted in many of these structures, especially for school support, which was guaranteed even during the months of emergency. Many families, however, found themselves unprepared for these new educational formulas because they lacked a PC, a tablet or a stable connection to make their children attend the video lessons. Fr Enzo Volpe SDB, director of the Salesian house of Santa Chiara in Palermo (Sicily), collected the requests of many parents experiencing precarious economic conditions in the district of Ballarò, Palermo, and then asked the national federation “Salesiani per il Sociale” to provide them with devices connected to the mobile network as soon as possible. Thanks to one of the suppliers of “Salesiani per il Sociale”, in a few days the national federation was able to deliver 5 tablets (with the possibility of connection) that, thanks to the volunteers of the local service in Palermo, were immediately distributed to those homes that needed them most urgently.

The effort of these weeks has been remarkable but none of this would have been possible without the generous response of many benefactors. There are still many requests that “Salesiani per il Sociale” is receiving in these very hours. A new phase of the emergency is beginning. There are new needs to satisfy and precautions to take.  Once again, with more strength, the national federation “Salesiani per il Sociale” wants to reiterate: “We are here and we don’t want to stop”.