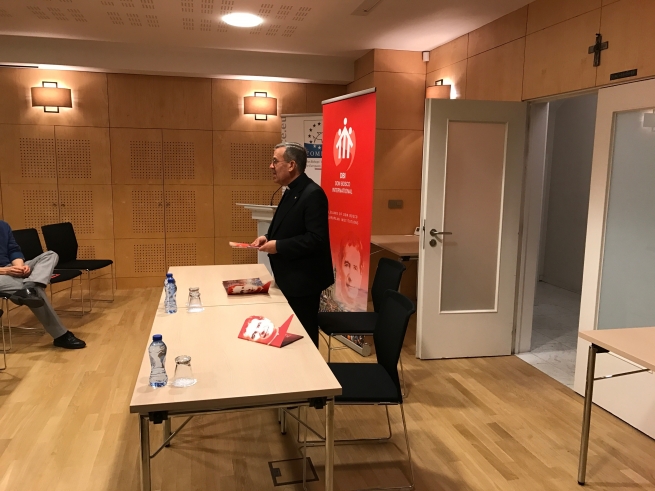 (ANS – Brussels) – On the occasion of the Feast of Don Bosco, Don Bosco International has organized for the first time, an evening reception in partnership with the Commission of the Bishops’ Conferences of the European Community (COMECE) to celebrate Don Bosco. This new initiative counted on the presence of Fr. Fabio Attard, President of DBI.

During the presence of Fr. Fabio Attard in Brussels, DBI had the occasion to present the work that Salesians are doing in Europe and worldwide using the new material elaborated by Don Bosco International (download in English – link to material).

The first institutional meeting with the European Commission was held at the office of the Head of Cabinet of Commissioner Marianne Thyssen, in charge of Employment and Social Affairs, Mr Stefaan Hermans; then followed the visit to the Permanent Representation of Malta, the nation presently holding the EU Council Presidency this semester. There were also some conversations held with Members of the European Parliament, who closely follow the Salesian reality.

To this intense agenda there were also two other very important meetings with the Secretary General of COMECE, Br. Olivier Poquillon OP, with whom DBI cooperates on a constant basis. The second and last meeting was held in the Apostolic Nunciature for the European Union with the Nuncio Mgr. Alain Lebeaupin, on 1st February 2017. Appreciation for the work of the Salesians of Don Bosco was expressed and also the encouragement to strengthen the way forward for a solid and integral educational proposal for the young.

There was also the moment of the Eucharistic celebration with several faith-based agencies that together with DBI are in partnership in various conferences and projects.

The reason behind these meetings is central to Don Bosco International: belief in Advocacy. It was an opportunity to present the agenda and concrete experiences that the Salesians of Don Bosco are currently offering to the young worldwide. The EU is a great opportunity and space where DBI strives to bring the voice of the young, especially the most needy, to the table and decision processes of the EU.

Speaking with one voice, being present in more than 130 countries, DBI is the voice of the Salesians of Don Bosco so that the young can be heard and helped towards a more active citizenship in society.