DBI & Misiones Salesianas: presentation of the documentary “Libertad” (from Sierra Leone) in Brussels 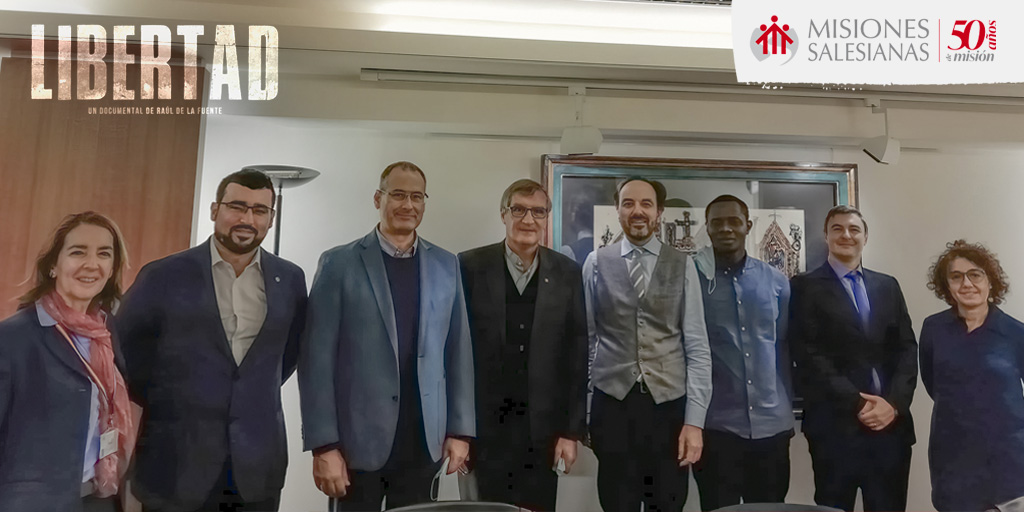 On Wednesday 6th of October, Don Bosco International had the honour to welcome in Brussels a delegation formed by representatives of Misiones Salesianas (Spain) and Don Bosco Fambul – Freetown (Sierra Leone) presenting the documentary “Libertad” (“Freedom”). The aim of this advocacy initiative is to raise awareness on the situation of minors serving their sentences in adult prisons around the world, with the example of Pademba Prison in Sierra Leone.

Mr Alberto Lopez and Mr Angel Gudiña represented Misiones Salesianas, the main producer of the documentary, accompanying two witnesses from Sierra Leone: Fr Jorge Crisafulli SDB and Mr Chennor Bah, respectively Director and Junior Staff of Don Bosco Fambul in Freetown. Such a delegation, guided by the Executive Secretary of Don Bosco International, Mr Renato Cursi, was able to meet some stakeholders of the Salesians of Don Bosco within the European Institutions in Brussels.

Bilateral meetings took place with the Permanent Representative of Spain to the European Union and its officers dealing with Cooperation for Development, with officers from the Secretariat of the European Parliament’s Sub-Committee for Human Rights and from the Secretariat of the EU-ACP (Africa, Caribbean and Pacific) countries’ Joint Parliamentary Assembly, as well as with the Unit for Western Africa of the European Commission’s Directorate General for International Partnerships.

The documentary was projected in two occasions: the first projection took place at COMECE, the Commission of EU Member States’ Catholic Bishops’ Conferences, and the second at the Chapel for Europe, an ecumenical space in the heart of the district of EU institutions in Brussels. Representatives from EU and other intergovernmental organizations were invited, while the second event was devoted to an audience of Brussels-based civil society organizations, including faith-based organizations.

The most appreciated element of this advocacy initiative was the testimony of Mr Chennor Bah, who shared his personal experience as a former street child and prisoner, then volunteering and now working as Junior Staff at Don Bosco Fambul in Freetown, helping out his old friends in prison and younger children who are still living in the streets. His story is one of suffering, redemption and forgiveness: Chennor showed how young people are an asset for society even when society has tried to discard them, and how important it is to reach out the most vulnerable among young people even in prisons and correction centers.

For those who missed the opportunity to watch the documentary, you are welcome to find it here.