HomeNews Belgium – United to end the scourge of child soldiers

Belgium – United to end the scourge of child soldiers 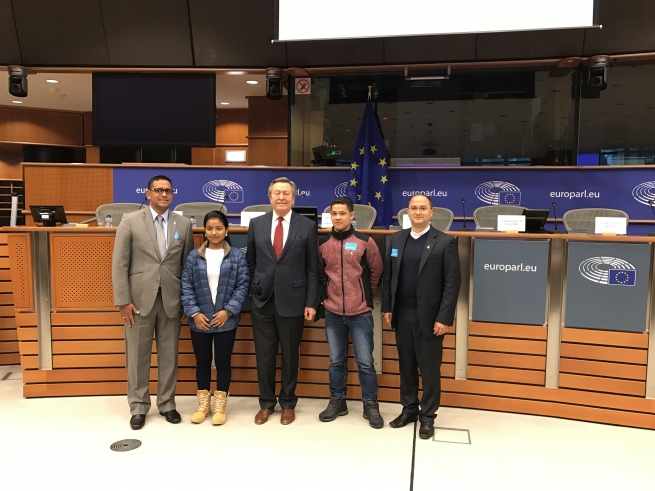 (ANS – Brussels) – Ahead of the International Day against the Use of Child Soldiers (12 February) and taking advantage of the valuable documentary produced by Misiones Salesianas entitled Alto el Fuego (Ceasefire) on the work being done by Salesians for the personal rehabilitation and social reintegration of child soldiers, Don Bosco International organized a series of events in Brussels to promote the Salesian work of Ciudad Don Bosco in Medellin.

After the first meetings in Rome, a delegation consisting of Manuel and Catalina, two young participants in the rehabilitation project, and Rafael Bejarano and James Areiza, Director and Head of Child Protection respectively in Ciudad Don Bosco in Medellin, has been continuing its tour in Belgium

On Monday 6 February, the documentary was presented to 600 students of the Woluwe-Saint-Lambert Institute. They showed enormous interest and respect for the work of Manuel and Catalina. Later, with the support of the Justice and Peace Commission and the Commission of Bishops’ Conferences of the European Community (COMECE), an information lunch was organized for representatives of the media and NGOs. In the afternoon, Fr Bejarano and the two young people spoke at the European Parliament, at the meeting of the Commission for the Andean countries, through the mediation of MEP Luis de Grandes.

Tuesday began with a meeting with the EU High Representative, Ms Federica Mogherini, who spent has an hour listening carefully to the two young Colombians. This was followed by a technical meeting with the Cabinet of the Commissioner Neven Mimica, who heads the Development Cooperation of the European Union, to learn about the available European funds available to support new processes of reintegration of young people who have experienced similar situations.

In the afternoon, there were visits to the Belgian NGO “Via Don Bosco”, to the Apostolic Nuncio to the EU, and to the Ambassador of Colombia in Brussels. He thanked them for their wonderful witness of reintegration which serves as an example for other young people and is very useful for the cause of the peace process, a treasure that Colombians have a duty to defend. The busy day ended at the Cervantes Institute, which hosted the presentation of the documentary to the public and to the staff of the embassy of the Latin American Spanish-speaking countries.

Today, Wednesday 8, the final day of the tour, the group is being interviewed by the national newspaper “La Libre Belgique”.

All the photographs are available on ANSFlickr.